Use the link below to enter to win!!!  The giveaway runs through Sunday, December 22, 2014 at midnight!


Just Because Giveaway
Posted by M.S. Willis at 6:21 AM No comments:

WARNING:  This is a dark book and should only be read by mature audiences.  There is disturbing subject matter and themes.  This teaser is unedited, so excuse spelling or grammatical errors.

Bowing his head slightly, Xander responded, “She is so weak, Aaron.  I wonder how she will survive.”  Aaron was shocked at Xander’s confession.  Although he knew his best friend and first guard was, at the core, a moral man, he’d never witnessed him show concern for anyone’s safety but Aaron’s.

“She’ll survive; but I’ll need to speak with daddy to make sure of it.”  Xander’s eyes widened in response to Aaron’s statement, but he faithfully fell in step behind him nonetheless.  The two men traveled the distance from Aaron’s apartment to the ballroom where he knew he would still find his father, piss drunk and covered with whores.  Now was the perfect opportunity to cement another rule in this game.  His father wanted nothing more than to corrupt his son with his gift, but Aaron wanted to publicly ensure that no one was to touch Madeleine besides himself.  If he could get his father to agree to the new condition in front of the members of the Estate, his father would have to honor that condition, forbidding every man at the compound to touch that which was Aaron’s.

Two men, both dressed in black on black suits, moved to open the large, double doors so that Aaron and Xander could pass through.  A grand entrance, the chaos of the room hushing quickly when the revelers noticed who had returned to the party.  As expected, his father sat upon a would-be throne; one woman massaging his shoulders while another had her head buried in his lap.  His face showed no reaction to the bobbing of her head, his shame at such public displays such as this, lost years before.  Eyes the color of steel moved to look at Aaron; the father finally acknowledging the presence of the son.

“Aaron…” His slurred words reverberated throughout the hushed silence of the room. “…So good for you to return to the celebration of your birth.  I do hope you’ve found…enjoyment…from your gift.”  Laughter, drowned in mockery and disdain rolled from his father’s lips; his sloppy movement and slurred words making his inebriation blindingly apparent.  “What brings you back?  I thought for sure you’d be riding her raw this evening.”  Another dark laugh.  “Or, has it been so long that you’re all dried up?”

Aaron waited for the responsive shouts and jeers by the men in the room to simmer down before answering.  “I thank you for the gift, father, however, I have a condition I’d like to request before I agree to use her as you require.  You see, I prefer my dick not shrivel and fall off my body, so I have a thing about not fucking whores who have been passed around liberally.”

A perfect eyebrow arched quizzically on his father’s brow.  “And what, exactly, is it you’re requesting, Aaron?”  His father’s voice deepened as he spoke.  Aaron hoped that his father believed he’d succeeded in finally corrupting him; however, he knew the man was far too shrewd to believe that he had caved so easily.  They’d been playing this game for too damn long.

“I’m requesting that the slave is mine, alone; that you order your men not to touch her while she remains in my service.”

His father’s hand grabbed the head, still bobbing in his lap, wrenching the woman back by her hair and tossing her aside like nothing more than garbage.  She’d cried out at his father’s actions, but knew better than to move away.  Crouching at his feet, the woman remained motionless, waiting for when she would be made to continue.  Aaron kept his eyes trained on those steel grey eyes of his father, not wanting to look down to see his father’s unabashed display.  Aaron’s father took a moment before responding.  Suspiciously eyeing his son, he finally spoke.  “I have to admit, I’m a little shocked by your request.  I thought for sure you would have tossed her aside, refused my offering.”

Rolling his shoulders back, Aaron carefully chose his words.  Madeleine’s safety was at risk, he needed to ensure she would be viewed as his.  “I assume, father, that you located this woman due to my interest in her.  Perhaps, you had me followed the night of her performance.  Given that to be the case, you know I was interested prior to your gifting of her to me.  It would make no sense for me to turn her away now.”  He made sure his voice was purposeful and strong, showing no signs of his desperate need for his father to agree publicly to his request.

The frantic beat of his heart echoed through Aaron’s ears as he waited for his father’s response.  White noise, a pulsing sound, as the blood rushed through his head.  The silence of the room was only disturbed by the shuffle of feet, a cough or the sound of a throat being cleared.  It was not only Aaron that waited, but the entire party, as well.  Never before had these men seen Aaron take part in the depravities of the Estate, in the cruel and sadistic actions of his father.  Yes, Aaron had killed, had taken the lives of those who threatened the network that, over the years, had been built by his father.  However, Aaron had acted only against other criminals, other people who’d committed enough evil of their own, that the world would never rue their absence.

If it hadn’t been for his father’s inebriation, Aaron knew his motives would have been further explored.  As it stood, his father could barely remain sitting upright, much less have enough mental function to see past Aaron’s intent. “And is it your request that she remain untouched by all of the men in this room?  Is she a toy kept for your pleasure alone?”

Weighted was the question his father asked; one intended to goad Aaron into a mistake.  He knew his father was placing him in a position to, once again, be reminded who ruled this network of criminals and thieves. If Aaron gave the wrong answer, Madeleine would be dragged out here now so that his father could show him who sat at the top of the Estate. “No, father.  I am still well aware that nothing within this compound shall be denied to you.  I’m simply requesting that all others be restricted from touching what is mine.”

Silence, pregnant with the anticipation of his father’s approval, was deafening against Aaron’s thoughts.  No man spoke, even the short coughs and cleared throats were absent as Aaron awaited his father’s directive.  Standing firm, his blue eyes never looked away from the scrutiny of the steel grey.

“Well done, Aaron, it’s good to see you understand who still sits at the top of this food chain.” Shifting in his seat while tucking himself back into his pants, his father raised his hand and snapped, summoning forth Emory, his most trusted man.

"There will be a new decree that needs to be delivered as quickly as possible..."  Emory lowered his head, indicating that the decree would be made known. "...No man shall touch Aaron's slave."

Relief flooded Aaron's body as he fought to keep his stance firm, not wanting the drop of his shoulders, or relaxation of his muscles to betray his feelings to the group. That relief, however, was short lived.

"However, although no man may touch the slave, it does not mean she can be hidden away." He turned to Aaron, amusement evident in his dark gaze.  "She will be displayed when requested by me. It would be a shame for your plaything to be kept, locked away from the enjoyment of the Estate." Lowering his voice to a dangerously low level, he added, "Do not forget that we are a community, my son. One in which, only one man is allowed selfishness."
Posted by M.S. Willis at 2:03 PM 1 comment: 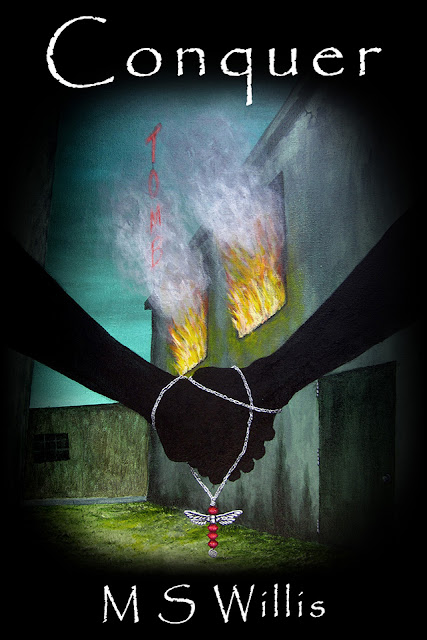 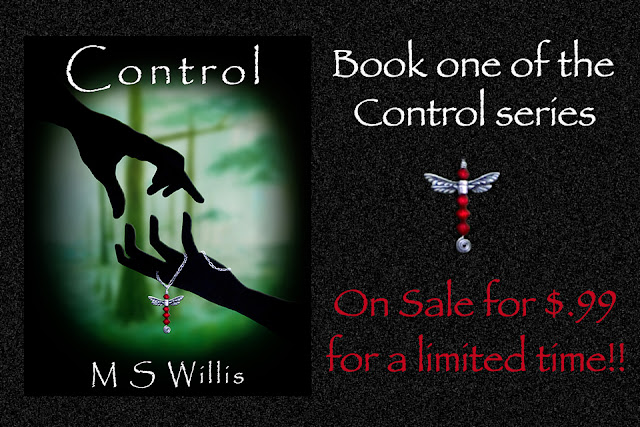 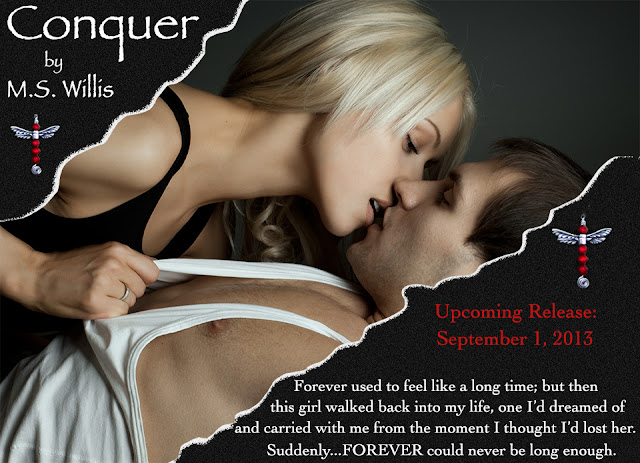 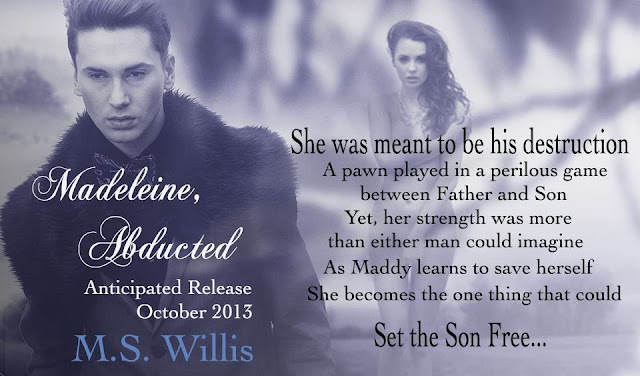 Other Places to find M.S. Willis

M.S. Willis
Author of the 'Control' series, the 'Estate' series and Because of Ellison